At the moment, I am working on an armor-related translation and again came across a quite mysterious inscription, namely „shintô-gotetsu-ren“ (神道五鉄錬). The first time I had to deal with such an inscription was in March 2010. I did some research but it turned out that really not much is known about it. For the time being, all I was able to find was an entry in Inada and Koop´s Japanese Names and How to Read Them: A Manual for Art Collectors and Students, first published in 1923 by the Eastern Press Ltd. Therein on page 330 we read: „shintô-gotetsu-ren (phrase implying ´carefully forged iron´).“ Well, this is not really satisfactory but better than nothing and when you let your thoughts run free, you can imagine that the phrase means something like „five times folded iron“ somehow connected with shintô purification, thus „carefully forged“ in the end.

By the way, the mentioned first shin-gotetsu-ren inscription I had to deal with was on a Jakushi-tsuba but which is slightly different as it reads „shintô-gotetsu-tan“ (神道五鉄鍛). This tsuba is depicted in the catalogue of Aotsu Yasuyoshi´s (青津保壽)  tôsôgu collection published by the Municipal Museum Sukagawa (須賀川市立博物館) in 2000. By the way, I did a translation of the index of this catalogue for a fellow comrade who owns a copy. Only seven months later I had to deal with very same tsuba, namely this time it was introduced by Fukushi Shigeo in part 186 of his series „Tôsô-tôsôgu shogaku-kyôshitsu“ (Tôken-Bijutsu 10-2010 No. 645, see picture 1). However, except quoting it, Fukushi did not elaborate on the mei of the piece. Once again I was unable to provide a better translation. Then in Februar 2012 I was asked for help regarding a Myôchin-tsuba of the 26th Myôchin-generation Munemasa (宗政, ?-1796). As you might already assume, it was signed with the supplement shin-gotetsu-ren.

Now one year later and with the armor-related translation, the matter didn´t let me rest and again I started some research. Incidentally, the term appears on an armor signature of Sendai-Myôchin Sadatoshi (定利). This time I made a find although I am not 100 % sure if I really found the „solution“ to this puzzle. What I was found were teppachi (鉄鉢), begging bowls for mendicant priests. (see picture 2). They were made of iron or clay, kept very simple, and in use at least since the Nara period. There was the custom that monks should repair them as many as five times when damaged so that they could be reused for a long time. This earned them the name „gotetsu-bachi“ (五綴鉢), lit. „five-times-repaired bowls“, or „gotetsu-teppachi“ (五綴鉄鉢). The writing with the characters (五鉄) could either mean that it was an abbreviation of the term gotetsu-teppachi (五綴鉄鉢), or the smiths just replaced the character for „repair, bind“ (tetsu, 綴) with the character for „iron“ (tetsu, 鉄). Well, I am a bit sceptical about the prefix „shintô“, i.e. Shintoism, as mostly Buddhist monks are known for being mendicants. But this might be explained by the practice of syncretism of Buddhism and Shintoism (shinbutsu-shûgô, 神仏習合) whereas collecting alms might have also played a role for Shinto priests. Extant gotetsu-bachi are very rare, especially older ones, as they were used up and eventually thrown away. So it is not too far-fetched to assume that smiths collected and processed them. Maybe certain smiths started to mention the fact that they are reusing old iron from a time-honoured begging bowl and it is likely that they found some religious customers who jumped at such works. Thus shintô-gotetsu-ren or shintô-gotetsu-tan means in my opinion „forged from an old begging bowl“. Interesting is that not only the Myôchin smiths used that phrase but also the Jakushi tsuba artist Koretaka (是高) who was the 7th and last Jakushi generation. He died in 1878 at the age of 65. I would be happy if someone could provide me one day with a shintô-gotetsu piece by another non-Myôchin artist. 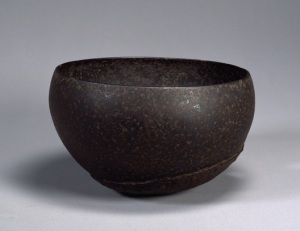 Some examples of Myôchin-tsuba bearing that phrase (just look for [神道五鉄錬]):