So yesterday, March 31, 2019, I had the honor of moderating a study meeting of the local sword club NY Token Kai here at the Met. With 43 participants (if I counted correctly, plus five staff), it was very well attended and the Art Study Room that we had set up for the meeting was maxed out but not overcrowded. From the feedback that I have received on the spot and later last night via email and text I think I am confident to say that this first NY Token Kai meeting at the Met was a great success! Feedback, positive and negative, is highly welcome, so please use the comment section below.

Now I made “Echizen Yasutsugu and the Shimosaka School” the topic of this first meeting. Background for my selection was that I had to find an area within our collection that is representative in terms of both quantity and quality. Our department is in the possession of about 15 Yasutsugu/Schimosaka School swords from which I picked the best five, five because this is the traditional number of what would be at a sword appreciation meeting (kanshō-kai, 鑑賞会) in Japan. No kantei this time, but I want to do one at a future meeting. 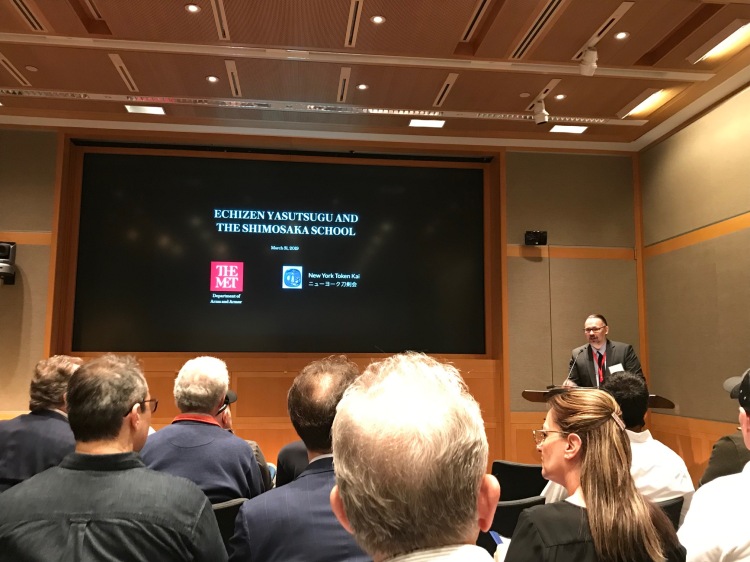 So the meeting started with my talk about the mentioned topic, which I explored from a more historic point of view rather than just narrating the workmanships of all Shimosaka masters and Yasutsugu generations. As you know, I always like to provide background information and connect the dots and so I refrained from mechanically reciting ko-itame this and gunome that if you know what I mean. In parallel to the five blades which I will introduce below, we were unboxing two of the boxes that house fittings by each of the Gotō generations (I have written about one of them here). Well, rather one of them … I had physically checked them both last Friday to see their interior but when we got them off the cart we learned that one box had magically locked itself over the weekend. Our conservators tried to pick the lock but no luck (or rather not the right tools present that day). However, we did find the keys to all the boxes today, so everything is fine and we were discussing the possibility of having some of these boxes (our department owns four) on display in our galleries. 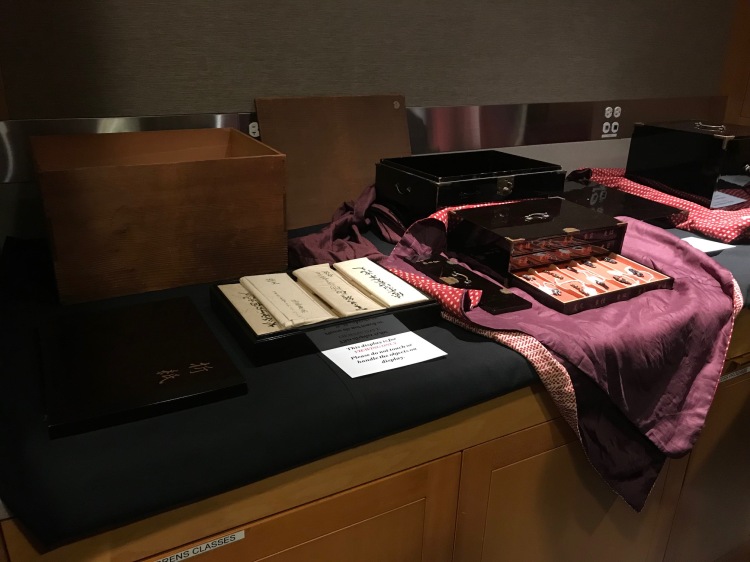 Now the following five blades were put out for study: 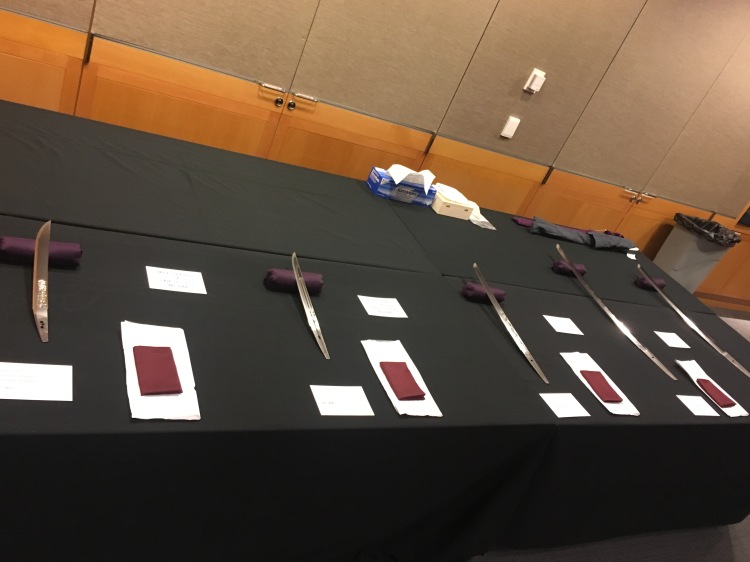 Between looking at the blades, or rather waiting in line to do so, and checking out the Gotō box(es), there was plenty of time for conversation I felt that everyone was having a great time. Before I am adding some more pictures and I would like to thank the club and its members for making a donation to our department (it is much appreciated by all of my colleagues), my dear colleagues Catherine Chesney, Sean Belair, and Ted Hunter for their assistance, and also of course the head of our department, Pierre Terjanian, who gave the green light right from the first time when I checked out the possibility of holding a NY Token Kai meeting at the Met. My sincere gratitude to all of you! 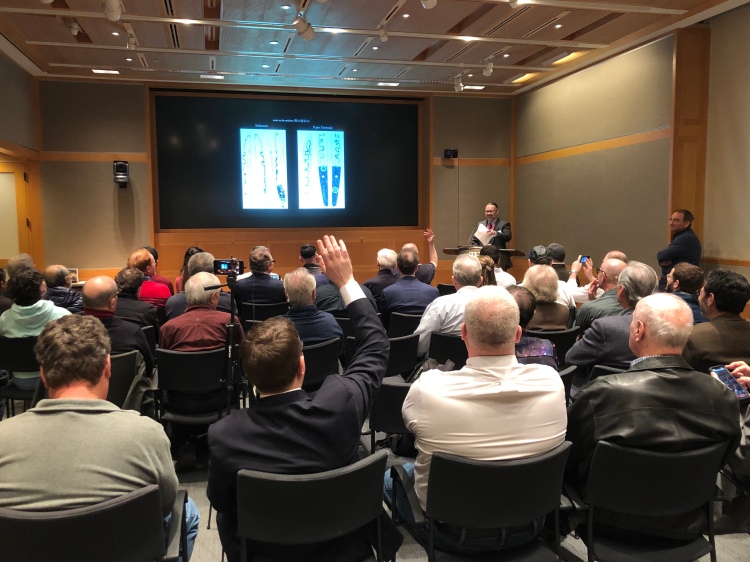 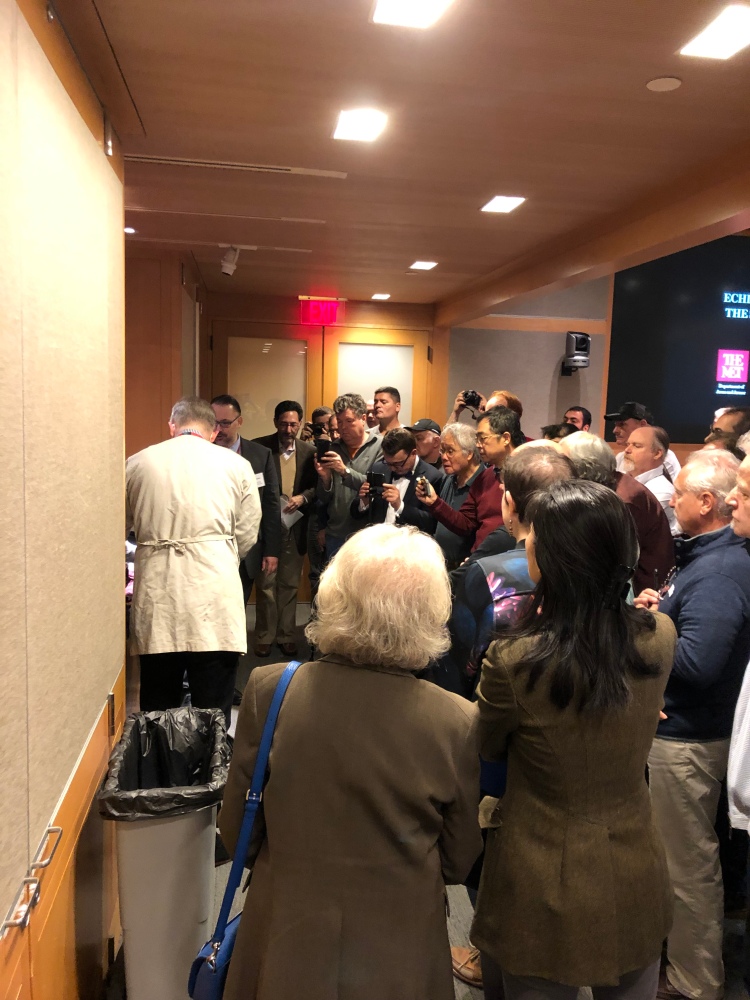 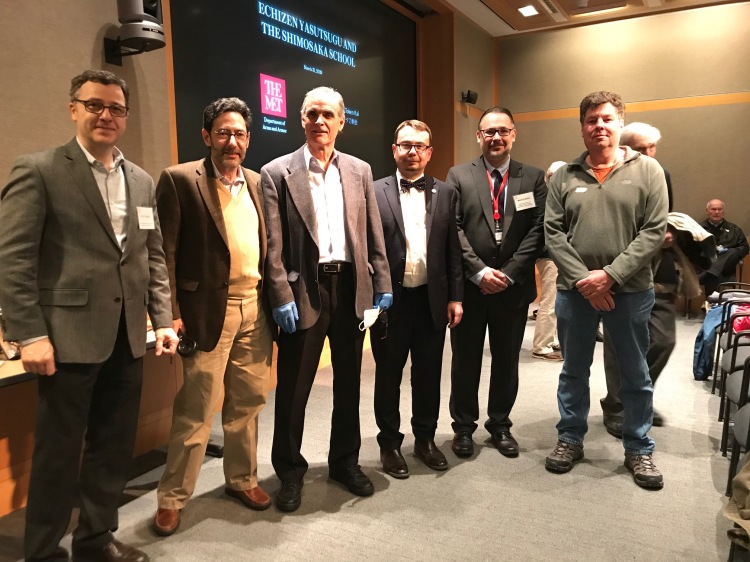 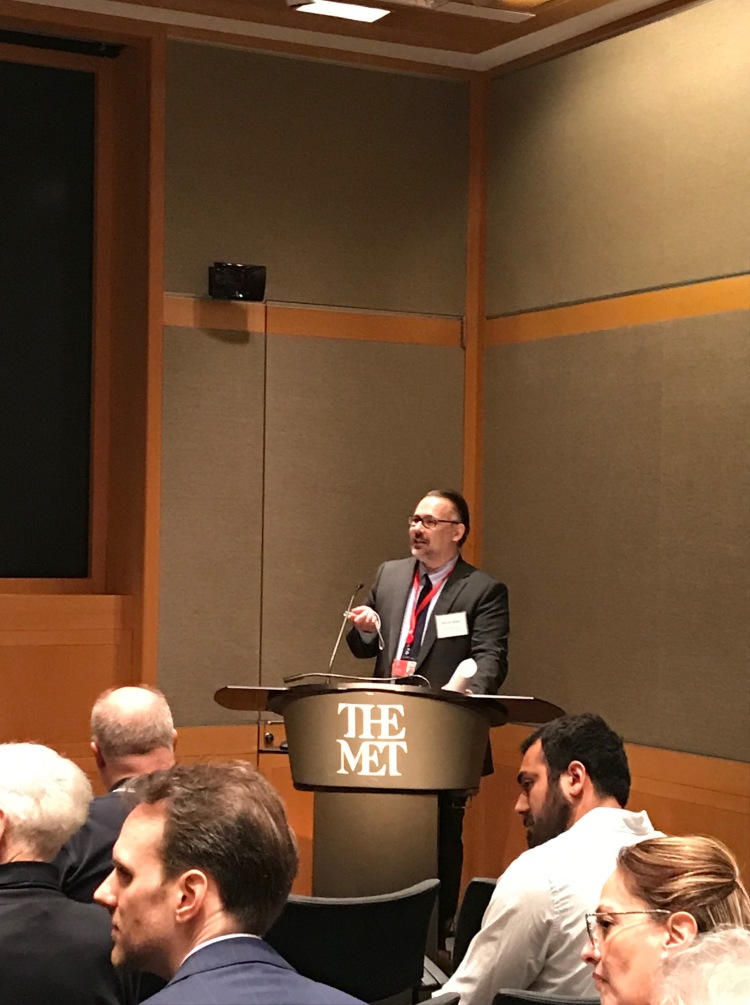 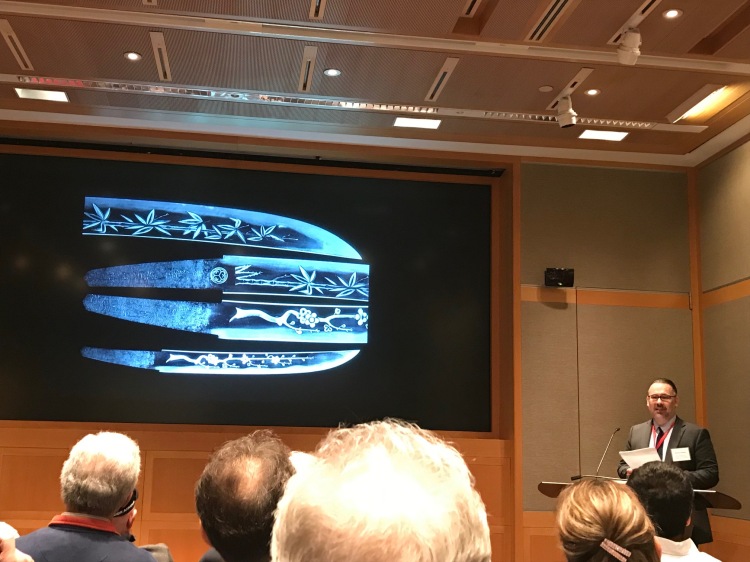 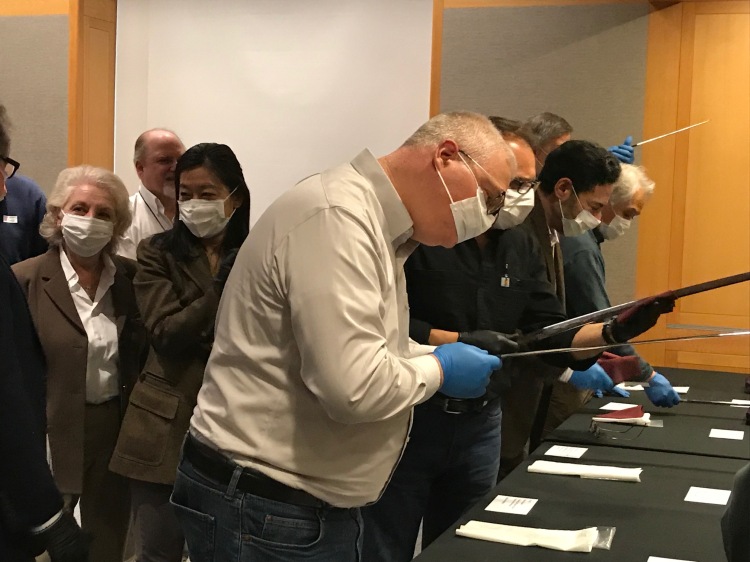 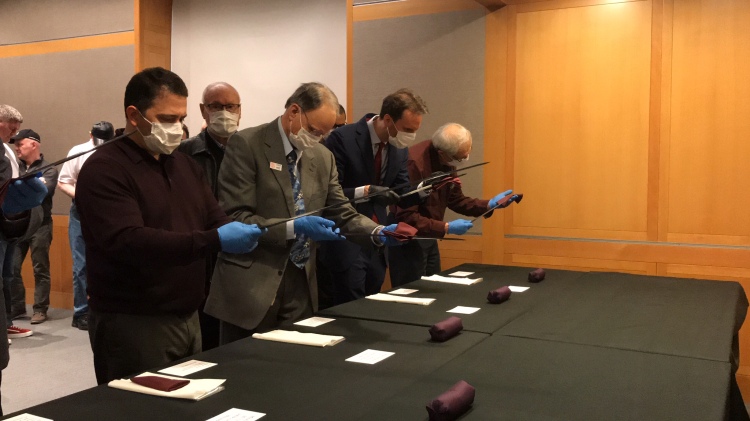 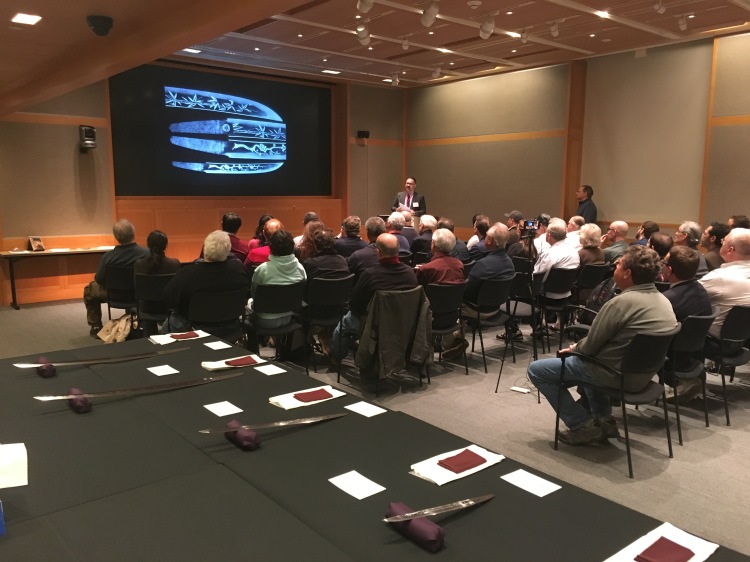 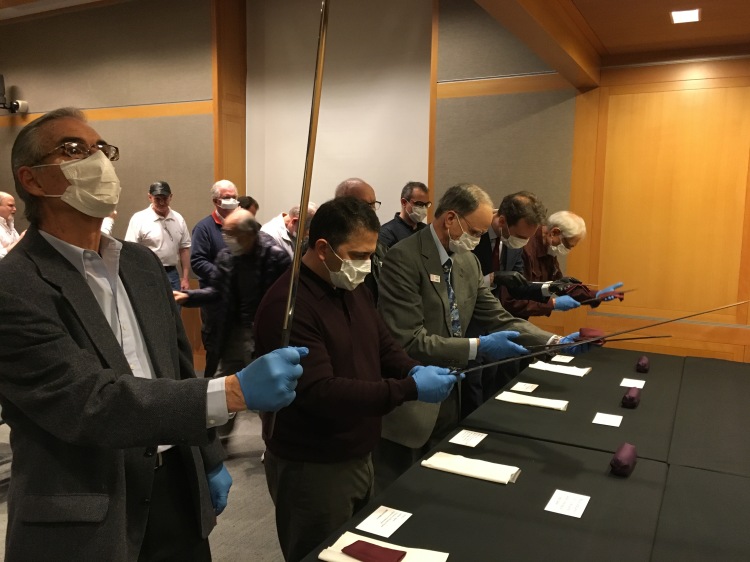