Usually when it comes to details in a swordsmith’s career, we are dependent on written records which were either compiled by period sword scholars, by fief/government officials, or by the family/lineage of the swordsmith. As you can imagine, things get lost over the centuries and you can basically say what you like on paper. That is, on certain occasions, either the local administration or the bakufu required the craftsmen that it employed to provide them with a genealogy or a family history, for example in order to assess an employment status or a rank. Now when you are the head of a family of swordsmiths or tsuba makers and approached with this official task, you present your lineage of course from its best side.

So far, so good, but then there are works by artists extant on/via which they explicitly state that on this or that day a certain thing happened and that this thing was a game changer. In many cases, the discovery of such a work nixes written records, or at least sets them straight, e.g. a smith mentioning in the mei that he made a blade in year X and at the age of Y on the basis of which his year of birth can be calculated, not seldomly contradicing the year of birth that one of his descendants later wrote down for the bakufu. Or, scholars were just assuming when certain things happened until that one work popped up. The sword that I want to introduce here is auch a work.

Now we are talking about the Harima-based smith Sōei (宗栄), or to be precise, about the third generation of that lineage. To get that out of the way, his name is sometimes also read Munehide and that might have actually been the proper reading of his name as the Sōei lineage goes back to a group of smiths who shared the Mune (宗) character and who read it that way, i.e. Munenaga (宗長), Munetsugu (宗次), Muneshige (宗重), but more on this later. In short, Sōei has become the common reading for this smith, motstly to distinguish him from other Munehide smiths, like Chōgi (長義) is traditionally read Chōgi and not Nagayoshi, i.e. to set him apart from the other Nagayoshi smiths.

Before we come back to the third generation Sōei, some background on his lineage. It all started in the late 1500s when Akamatsu Masahide (赤松政秀, 1510-1570) was castellan of Tatsuno Castle (龍野城) in Harima province and needed some swordsmiths. So he hired master Munenaga (宗長) from Wakasa province whose ancestor was once a student of the second generation Nakajima-Rai Kuninaga (中島来国長). It appears that Munenaga took several smiths with him, maybe his students, or that Akamatsu Masahide hired more Wakasa smiths as we see a certain migration of Mune… smiths from Wakasa to Harima at that time. Be that as it may, the Sōei lineage goes back to that relocated Mune… group.

Fast forward to the early Edo period. The Akamatsu have been defeated and Harima province was split up into several fiefs after Sekigahara, with Himeji (姫路藩) being the most powerful one and being successively ruled by the Ikeda (池田), the Honda (本多), the Matsudaira (松平), and the Sakakibara (榊原). These relatively quickly changing rulers of Harima/Himeji might be a reason for why there are hardly any works of the first two generations Sōei extant, who are dated around Meireki (明暦, 1655-1658) and Kanbun (寛文, 1661-1673) respectively by the way. However, we know of worse situations and still plenty of swords being produced, so the issue of the circumstances of the first two Sōei generations needs further study.

Back to the third master, whose real name was Suzuki Gorō ́emon (鈴木五郎右衛門) and who was born in Kan ́ei eleven (寛永, 1634). It is said that his employment with the Matsudaira, the then daimyõ of Himeji, was confirmed when he was 15 years old, which would be Keian one (慶安, 1648) (according to the Japanese way of counting). The year after however, the fief was given to the Sakakibara who ruled in until 1667 when it was given back to the Matsudaira. The Matsudaira ruled Himeji again until 1682 and then the Honda took over. For a better overview, this was all the back and forth between those clans:

The earliest extant dated work of the third generation Sōei is from Enpō one (延宝, 1673). It is signed as being made in Harima province and we find dated blades made in Harima until Tenna two (天和, 1682). A little later, he came to the attention of Ikeda Tsunamasa (池田綱政, 1638-1746), the daimyō of the Bizen Okayama fief (岡山藩), who hired Sōei to work for him locally. We know two dated blades made with a reference to Okayama in the mei, one from Jōkyō two (貞享, 1685) and one from Jōkyo three (1686). Apart from that, we know of a blade that is signed “Suzuki Sōei saku” and “made with nanban-tetsu in Ōsaka” but it is undated and so we don’t know when he made that trip Ōsaka and how long he stayed there.

Anyway, it was this relationship with Ikeda Tsunamasa which earned Sōei his later name, U or Usaku, and this name change goes back to the following anecdote: It was in Genroku five (元禄, 1692) when Tsunamasa asked Sōei to make a copy of a Samonji treasure sword (or several such copies, records vary in this respect) that the Ikeda owned. The copy turned out to be quite excellent and Tsunamasa was so pleased that he said: “This work is better than the Sa (左), so you may better call yourself U (右)!” This has to be understood in the context of period Japanese hierarchy, i.e. U (lit. “to the right”) ranks above Sa (lit. “to the left”). Sōei did so and signed henceforth with U in the following combinations:

And now we come to the blade that I want to introduce in this article. Up to its discovery (I think it was in 2013), it was unclear when Sōei took the U name but the very blade (see picture below) makes it clear, it was in Genroku seven (1694). The full signature reads:

Genroku shichi kinoe-inudoshi nigatsu hatsu-uma no hi renkan nijūdo kore o kitaeru (元禄七甲戌年二月初午ノ日錬貫廿度鍛之) – “Forged with twenty folds on the first day of the horse of the second month of Genroku seven (1694), year of the dog.” 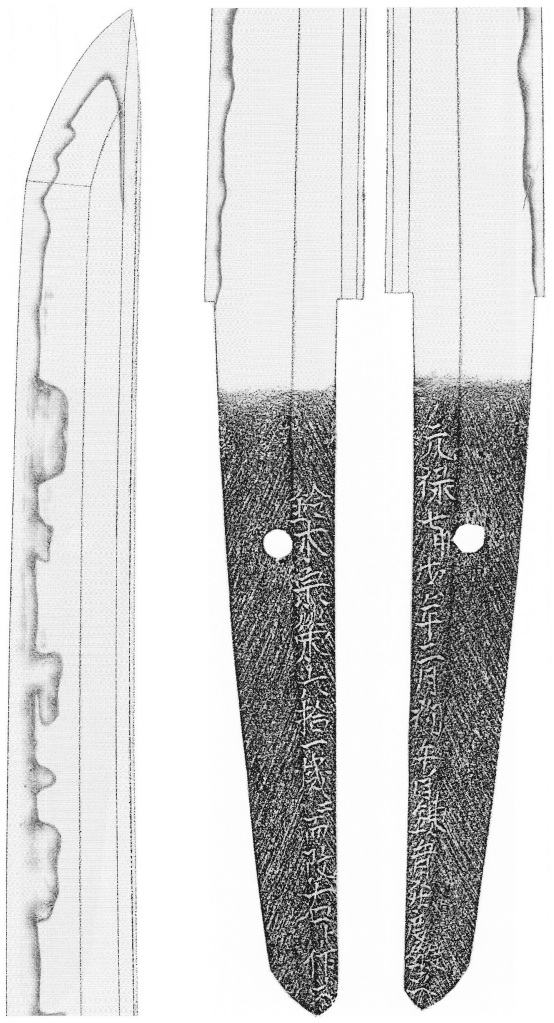 Now the inscription does not explicitly say that this was the very day Sōei got that name change recommendation from Ikeda Tsunamasa but from experience I can say that such very detailed mei usually commemorate an important occasion. That is, it is in my opinion unlikely that the ancedote with the Samonji copy took place one or two years earlier and that “all of a sudden,” Sōei decided in 1694 that it is now time for a name change. In other words, I think the anecdote took place right before, most likely during the first month of that year and Sōei decided to wait for the auspicious day of the first day of the horse of the second month, a day which on which special prayers and shrine visits are taking place all over the country, to make this commemorative sword. Or at least it was finished and signed that day, forging obviously started earlier, so Sōei was working towards that auspicious date. Incidentally, it is unclear if the “forged with twenty folds” makes sense in metallurgical terms but it may not be interpreted literally, i.e. Sōei more or less stating here that the blade was forged with utmost care.

One interesting thing is that the blade is a rather long wakizashi, measuring 54.9 cm in its nagasa. This leaves room for speculation, like if Sōei actually made a daishō back then and only the shō has survived (was discovered) so far. There is another dated blade extant which Sōei made that very month. It is signed “U – Fujiwara Sōei” and just dated with “a day of the second month of Genroku seven, year of the dog.” This blade, like some others that are known, shows a certain practice/opportunity of Sōei, namely that he was able to work with the famous high-quality Chigusa (千種) steel made in Shisō (宍粟) in his home province of Harima. The very reference to this steel is usually signed by Sōei in the following way: “Banshū Shisō Chigusa eitetsu maru’ichi o motte renkan kore o kitaeru” (播州宍粟千種丸一以英鉄錬貫鍛是), which means “thoroughly forged by using solely exquisite Chigusa steel from Shisō in Harima province.”

As mentioned, we don’t know how long Sōei stayed in Bizen Okayama. The numerous works with a reference to Chigusa steel, e.g. one dated Genroku twelve (1699) don’t necessarily means that he was back home by then as Ikeda Tsunamasa could have arranged that the steel was brought from Harima to Okayama where Sōei processed it locally (via oroshigane). The earliest known dated blade that states it was made again in Harima is from Hōei one (宝永, 1704). The mei says “Ban’yō Tegarayama no fumoto ni oite” (於播陽手柄山麓), “made on the foot of Mt. Tegarayama in Harima province.” Now this blade is a special order blade, for a certain Yuguchi Sukeyori (湯口祐頼), and the syntax with ni oite (i.e. “at” and not “resident of”) differs from his earlier Harima-based mei where Sōei just signed with “Harima ni Kuni…” That is, he may have returned to Harima just on certain occasions and may have spent the rest of his life in Okayama? His successors however worked again in Himeji/Harima.

According to tradition, Sōei died on the 27th day of the second month of Hōei five (宝永, 1708). Taking the mei of the blade introduced here as a basis, he lived to the age of 75 (and not to the age of 99 as stated so in the Kokon Kaji Bikō). The latest known blade that bears his age in the mei is from Hōei three (1706), stating that he made it at the age of 73, what is a match. There is a blade form his successor extant which is signed “Yondai-me Sōei jūsan-sai kore o tsukuru” (四代目宗栄十三歳造之), “made by the fourth generation Sōei at the age of 13”). As far as I know, this blade is not dated and we don’t know when the fourth generation Sōei was born. Tsuneishi says that the fifth and sixth generations died shortly after another, that is in Meiwa four (明和, 1767) and Meiwa eight (1771) respectively. The sixth generation is usually dated around Kyōwa (享和, 1801-1804) and all three, i.e. the fourth, fifth, and sixth masters, signed with “Harima no Kuni…” (播磨国…), “Banshū-jū…” (播州住…) or “Ban’yō Himeji-shin…” (播陽姫路臣…, “retainer of Himeji in Harima province”). So as mentioned, we know that they all worked again in Himeji/Harima.

I hope this article gave you an interesting insight into the life of Sōei and I have a few more blades in my references that mark special occasions in the career of a swordsmith and which I would like to introduce in the future.