The last master of the time-honoured lineage of Kanesada swordsmiths was the 11th generation of the Aizu branch. When I speak of the Kanesada lineage, I refer to the Bunmei-era (文明, 1469-1487) Mino Kanesada as ancestor and as 1st generation of the Seki main line. His son, the 2nd generation, was the famous No-Sada and his grandson, that means the son of the 3rd generation, founded the Aizu branch. According to transmission, the Aizu-Kanesada ancestor was hired in the second year of Kôji (弘治, 1556) by the Ashina family (蘆名) and moved to their lands in Aizu, in the northern Ôshû region. Well, the 11th generation Aizu Kanesada was born in Tenpô eight (天保, 1837) in Aizu-Wakamatsu´s Jôkôji-machi (浄光寺町) which is located just a little over 1 km to the northeast of Wakamatsu Castle. He started his apprenticeship as swordsmith under his father at the age of 14. Two years later, in the eleventh month of Kaei five (嘉永, 1852), he got the opportunity to display his skills in front of higher officials of the fief. He performed well and was thus allowed to take over the business of his father whereupon he received a stipend for the support of one person. This was also the time when he took the name „Kanemoto“ (兼元). The following years he made a lot of daisaku-daimei works for his father. It is assumed that he changed his name to „Kanesada“ somewhere between the seventh year of Ansei (安政, 1860) and the third year of Bunkyû (文久, 1863). It is difficult to nail down the exact year because from extant dated blades we know that he used parallel both names. In the first year of Bunkyû, an incident occured for which he was punished. At that time, he got several orders from samurai of the fief to forge blades with the addition of gold (ôgon, 黄金). This pecularity was to a certain extent in fashion at that time and also called „dôtetsu-hada“ (銅鉄肌, lit. „copper-iron-mix hada“). It appears as dark, thick and wavy areas in the ji whose own structure is muji. Anyway, one of his students told others that his master always kept the koban gold coin he received from his customers for the ôgon forging. That means the student claimed that his master did not really work the gold into the steel at the oroshigane process. Kanesada rebuked him but the student even offended a fellow student and runned out of the forge heading for his family. The master ran down after him and catched up with him. It started to rain whilst they exchanged some „nice words” but the student was unimpressed and turned away which was a gross discourtesy to his master. Thereupon Kanesada drew his sword and killed him cutting down right through the young man´s umbrella.

In the seventh month of Bunkyû three (1863) he went to Kyôto for the purposes of refining his craft under either the 10th generation Iga no Kami Kinmichi (伊賀守金道) or under Ômi no Kami Kaneyuki (近江守金行).  And in the twelfth month of that year he received eventually the honorary title „Izumi no Kami“ (和泉守). This was a special honor as no one except him and the famous No-Sada ever received this title from the Kanesada lineage. He was 27 years old at that time. Out of gratitude he forged three tachi, one for the emperor, one for the crown prince and one for the crown prince´s wife. And the fief rewarded him with two ryô of silver.

His employer the Hoshina family (保科) was related to the family of the shôgun and had therefore changed its name at the end of the 17th century to „Aizu-Matsudaira“ (会津松平). Because of this relationship, the family was deeper involved in the turmoils of the bakumatsu era than some other daimyô. The last Aizu-daimyō Matsudaira Katamori (松平容保, 1836-1893, see picture 1) was appointed in Bunkyû two (1862) to the newly created post of Kyôto Military Commissioner (Kyôto-shugo, 京都守護). With this post he was responsible for public order and had to struggle with the upcoming royalists. He brought some of his own retainers but recruited also men from the Shinsengumi and even employed some rônin. Thus there was a demand for swords in that context and Kanesada had to stay in Kyôto. When the so-called „Hamaguri Gate Rebellion“ (Hamaguri-gomon no hen, 蛤御門の変) took place in 1864 where royalists rebelled against the Tokugawa at the Hamaguri Gate of the Imperial Palace, Kanesada was allowed to stay within the palace, even he was a swordsmith, to support the imperial guards. Incidentally, the favorite sword of Hijikata Toshizô (土方歳三, 1835-1869), the vice-commander of the Shinsengumi, was a work of Kanesada. It is still preserved by the Hijikata family. Well, Kanesada returned to Aizu in the first year of Keiô (慶応, 1865). 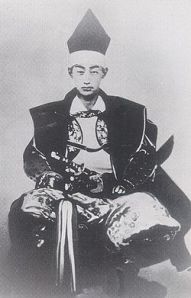 Back in Aizu he made first and foremost chûmon-uchi, swords ordered by customers and not for the arsenal of the fief. But the situation became critical when the Aizu fief got involved in the Boshin War (戊辰戦争) in the fourth month of Keiô four (1868). Four months later Aizu-Wakamatsu Castle was besieged and Kanesada, who was in the castle at that time, was ordered to cast rifle bullets. In the end, Katamori had to surrender and Kanesada was placed under house arrest. When the political situation had calmed down, the new Meiji government sent him to Kamo (加茂・賀茂) to Echigo province where he was able to work until Meiji seven (1874). In the meanwhile, Echigo province had been turned into Niigata Prefecture by the way. Works from these five years are called „Kamo-uchi“ (加茂打ち). Most of them are undated and as Echigo was and is one of Japan´s „rice bowls“, it is assumed that he worked mostly for wealthy landowners and rice traders. In Meiji seven he returned to Aizu-Wakamatsu and was two years later employed by the newly founded Fukushima Prefecture, namely as low-ranking government official in the building authorities. It is said that he did not give up sword forging but no signed works are known from the following 20 years or more. It is said that he reused and refined old iron during these years and focused on copies of mumei suriage-kotô blades. In order to get himself back on the map, he forged in 1892 a sword as present for the then crown prince Yoshihito (嘉仁), the later emperor Taishô (大正天皇, 1879-1926). The present was favorably received and he was rewarded with a 10 Yen gold coin. Using the Consumer Price unit, 10 Yen would be today around 45.000 Yen, i.e. around $ 450. 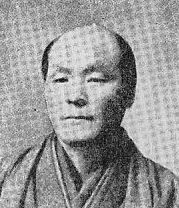 Picture 2: Kanesada in his mid fifties.

From extant documents and letters we know that he still trained some students after that time, Kanemitsu (兼光), civilian name „Sawada Yoshitarô“ (沢田吉太郎), and Kaneshige (兼重), civlian name „Sugei Usaku“ (菅井宇作), for example. When the local ex-samurai Shiba Gorô (柴五郎, 1860-1945) served in the First Sino-Japanese War and acted as military attaché at the Japanese legation during the Boxer Rebellion in 1900, Kanesada forged him for free a guntô to support his fellow Aizu countryman. There is a theory that this sword was brought by GI´s to San Francisco after World War II. Shiba attempted suizide after the surrender of Japan and died four months later of his wounds. However, Kanesada worked from the first month of Meiji 36 (1903) for the newly founded Army Artillery Weapons Factory (Rikugun-hôhei-kôshô, 陸軍砲兵工廠) in Tôkyô as they was a forge erected there. There are also blades extant on which he mentions this employer on the tang (see picture 3). It was in general a time of military build-up and thus a lot of guntô, also traditionally forged ones were needed. Many high-ranking persons and members of the new aristocracy visited this forge but Kanesada was not able to show his full skill as he died suddenly on the 28th day of the third month of the very same year (1903) at the age of 67. It is said that he was working on swords for the prime minister and a British ambassador at that time which he was unable to finish. He must had enjoyed a certain fame as several newspapers in Tôkyô mentioned his passing in detail. 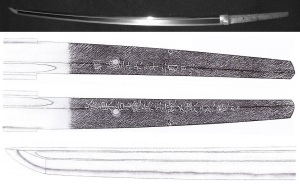 21 thoughts on “The last of the Kanesada”