By way of an introduction, I would like to present one of my favourite tsuba (see picture 1). At this point I would also like to thank to owner for allowing me to study this fantastic work hands-on. The tsuba has jûyô papers, is of oborogin, depicts Kanzan (寒山), Jittoku (拾得) and a tiger, and is signed „Hôshû Unno Shômin“ + seal (芳洲海野勝珉). It has a slight tsuchime surface and Kanzan and Jittoku are represented by to the combined application of sukidashi-usunikubori and shishiai-bori. The gentle and rather sketchy tiger is done in katakiribori (see detail picture 2). It was made according to a special order of the Kôbe millionaire Ryûshidô Mitsumura Toshimo (龍獅堂光村利藻, 1877-1955) who had an especially profound appreciation of sword fittings. Shômin made it in Meiji 36 (1903), meeting his 60th birthday. It was made at a time when he was way out of the woods, having left behind the difficulties of the haitôrei, the Sword Abolishment Edict. In the eleventh and fourteenth year of Meiji (1878 and 1881), at the first and second „Exhibition for the Industrial Promotion of the Country“ (kokunai-kangyô-hakurankai, 国内勧業博覧会), he won prizes for his metalworks. And for the fourth exhibition held in Meiji 28 (1895), he was already appointed as a judge. Five years earlier, i.e. in 1890, Unno Shômin had entered the Tôkyô School of Fine Arts and studied there under Kanô Natsuo. One year later he became assistant professor and in November 1894 he was a regular professor. And in 1896, he finally became a teishitsu-gigei´in (帝室技芸員, lit. „Imperial craftsman“), the forerunner of the later ningen-kokuhô. To demonstrate the exciting but hard times back then for Japanese metal workers I would like to translate from the records of Mukai Katsuaki (向井勝明, also read „Shômei“), one of Shômin´s students. 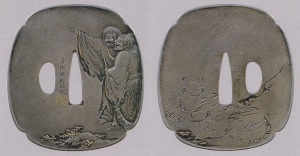 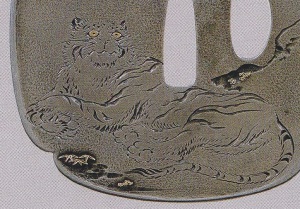 Picture 2: Detail of the tiger

„My master to was faced with the Meiji-era haitôrei and had to see to make somehow his living. At certain times he even runned a wheeled oden stall (a classical winter dish of different ingredients stewed in a light broth) or performed shinnai songs (新内) at various stages in Asakusa. But he was one of the first kinkô artists who expanded his repertoire by making vases, okimono ornaments, tee utensils, jewelry, accessories and the like and so he was able to survive these difficult times. At the time I became his student, one hour lesson was 50 Yen, an amount not easy to find for an extended family like mine. That means the kitchen often remained cold and my master also had to go to the pawnbroker on a regular basis. There was even a special wall closet at the pawnbroker just for my master.

When times improved we moved from Komagome (駒込) to Banba-machi (番場町) in Edo´s Honjo district (本所). The new house and workshop was so stately that we jokingly called it ´the Banba palace´. At that time, bonsai were the hobby of our master. Every morning they had to be moved out on the veranda and every student was instructed by Shômin in thir care and handling. When he became professor at the Tôkyô School of Fine Arts he took the horse-drawn carriage every day, also back home for lunch. He often dressed-up like a bushi back then, wearing the montsuki-hakama (紋付き袴), the formal wear consisting of a crested kimono and a hakama. He also had got into the habit to stalk with a demonstratively stretched-out elbow. All this set tongues wagging of course.

During his last years my master had a high blood pressure and from time to time he suffered from paralysis symptoms because of his swollen arms and legs. He also drank a lot and his wife and all persons around had to take care of him when he drank his bottle of sake every evening. And when there were guests or customers, this habit regularily developed into a drinking bout but there were also days where I had to ´play´ the guest to initiate a drinking bout. From about the second or third year of Taishô (1913/14) the paralysis worsened and if I did not help him with his work, sometimes nothing would have moved on. Often he had to take a nap during working hours and we had to be quiet. That means in fact we had to pause or work for one or two hours. When he woke up it was my job to hand him the chisels or sometimes even to guide his hands to carry out certain chisellings. That means one can imagine that there were times when you were not even able to work on your own projects for more than one our without interruption.

But our master pointed out again and again that he has ´tough Mito bones´ [Translator´s note: Shômin was born in Mito in Hitachi province.] But one day he collapsed in the lavatory, probably because of his high blood pressure. He was able to get eventually out by his own and the doctor said that he rarely has such tough patients but regardless of what he tried, our master died two days later on the sixth of September 1915 at the age of 72.” [Translator´s note: The sources vary in this respect and quote also the eighth or tenth of October as his day of death.]

2 thoughts on “From the life of Unno Shômin”