Many of you may know Nasu no Yoichi (那須与一, 1169-1190/1232), the famous Minamoto warrior who shot down the fan the Taira put atop a pole on one of their ships with a single shot during the Battle of Yashima in 1185. For this and other great military achievements, he received from Minamoto no Yoritomo (源頼朝, 1147-1199) a fabulous tachi by Ko-Bizen Naritaka (古備前成高). 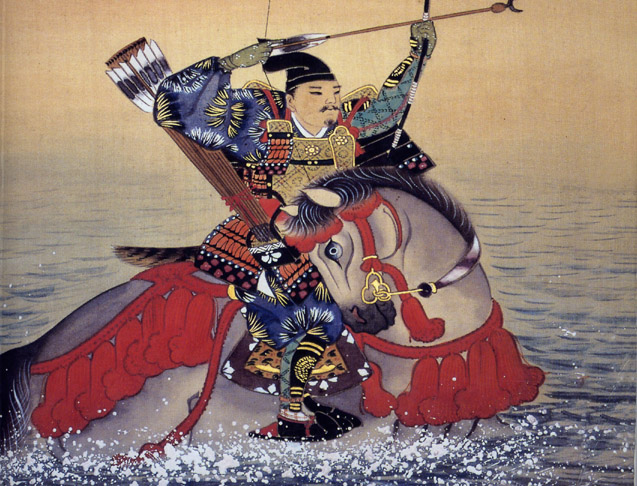 Now through very lucky circumstances, that very sword was handed down within the Nasu family for about 800 years, and is still extant today. Yes, you heard me correctly, 800 years in the possession of the same family! The tachi is depicted and described in the first volume of the Nasu Ke Gunki Zu (那須家軍器図), the arms and armors in the possession of the Nasu family, compiled by Yoichi’s descendant Nasu Sukeaki (那須資明) in Tenmei seven (天明, 1787). It is also featured in the Kansei twelve (寛政, 1800) publication Shūko Jisshū (集古十種) (see pictures below). 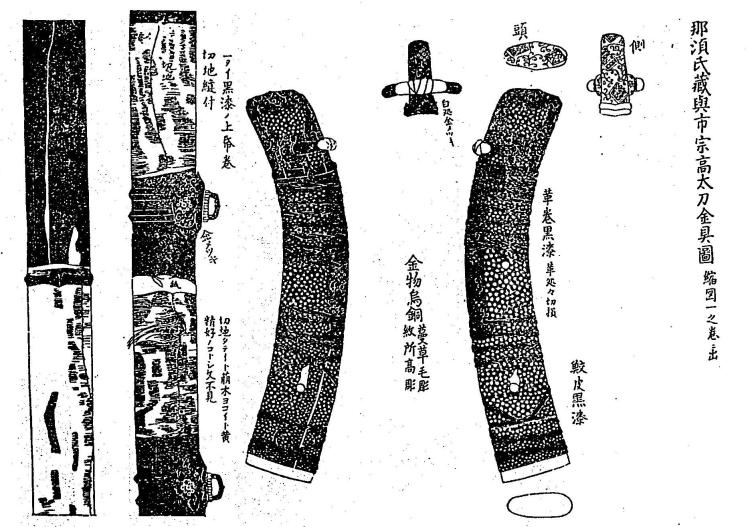 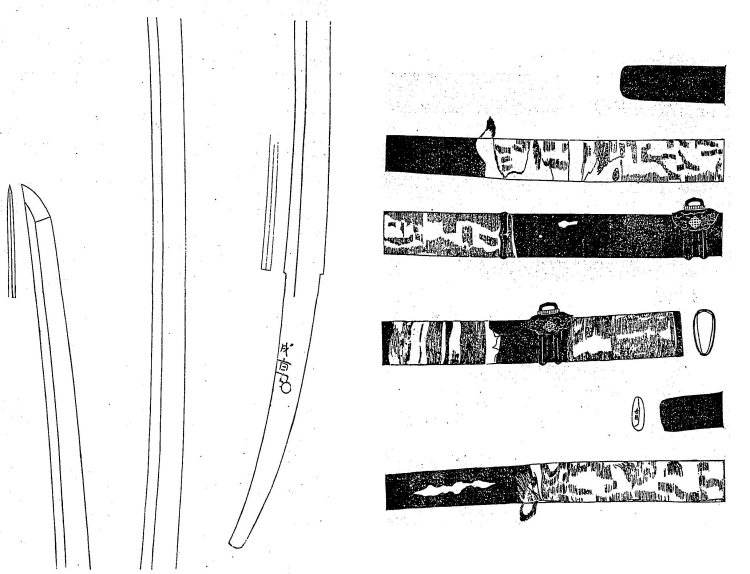 Fast forward about 150 years from Nasu Sukeaki, that is to December 18, 1935, the blade and its koshirae, which is contemporary to the blade, was designated to a jūyō-bijutsuhin. Then owner was Nasu Suketoyo (那須資豊), another descendant of Yoichi. The picture below shows the pictures from the jūyō-bijutsuhin designation. 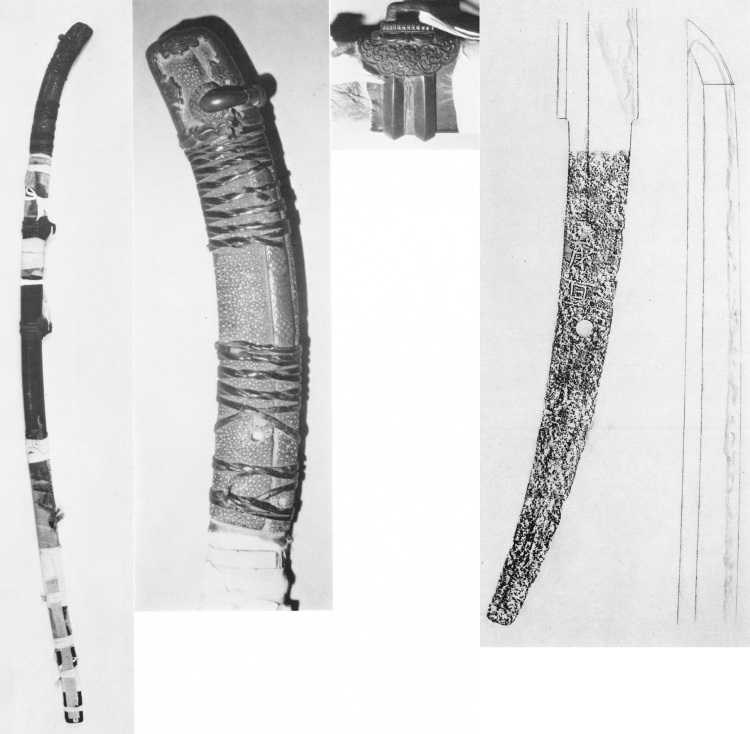 Forward another roughly 50 years, to June 6, 1987, the sword was elevated to jūyō-bunkazai status. Then owner, and you may already guess it, was another member of the Nasu family, Nasu Takashi (那須隆, 1924-2008). Today the sword is owned by the Nasu Yoichi Denshōkan in Ōtawara, Tochigi Prefecture. 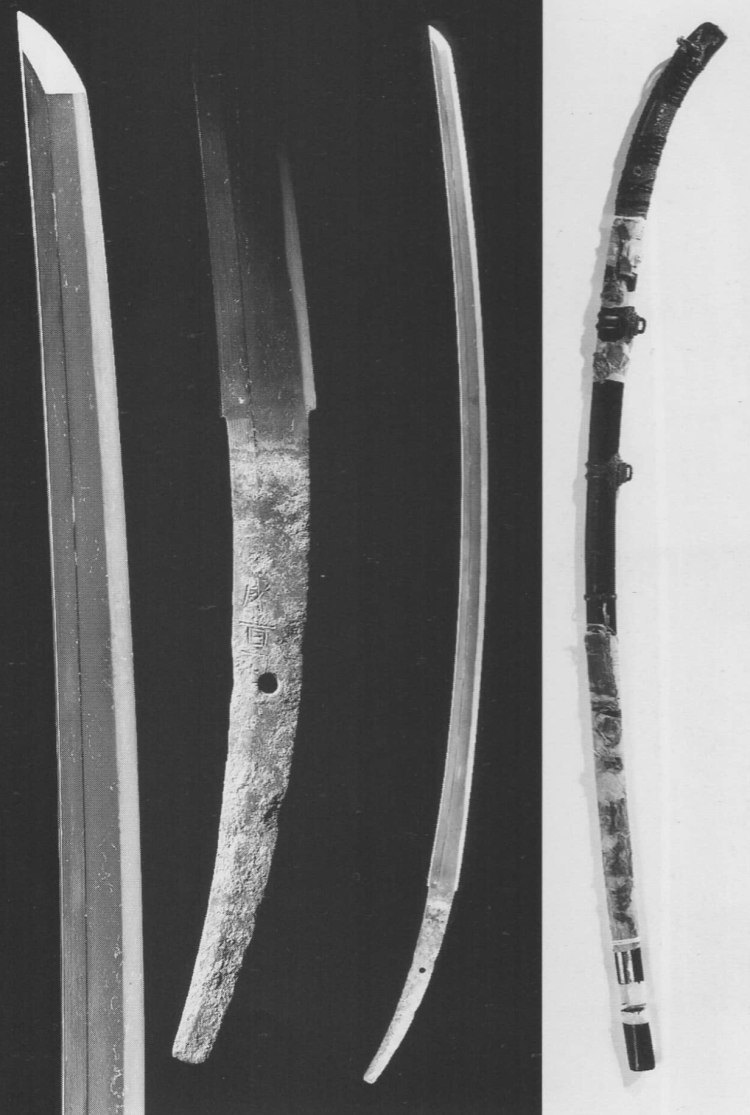 From the jūyō-bunkazai designation. Nagasa of the blade is 79.8 cm, overall length of the koshirae is 104.0 cm.

Now let me describe this historically so important sword. Why it is so historically important? Well, it has a pretty rock-solid provenance, it dates back to the late Heian period, it is completely ubu, signed, has one mekugi-ana, and still has its original koshirae, so we are pretty much in supreme unicorn levels of Japanese swords. The tachi is slender and of a very elegant shape, as it is typical for that time, having a quite shallow sori along the blade section but which gets very pronounced in the tang and from where the tang starts. Incidentally, this peculiar blade/tang sori distribution is sometimes described as “he shape” as it resembles the hiragana syllable he (へ). And due to this curved (magari) hilt (tsuka), this sword got the nickname Tsukamagari-Naritaka (柄曲がり成高), lit. “curved hilt Naritaka.” The kitae is a rather standing-out itame to ko-itame that is mixed with mokume and that shows ji-nie. The steel is blackish and the hamon is hardened in ko-nie-deki and appears as suguha-chō with a rather tight nioiguchi along the top, and as a ko-midare-chō with a somewhat subdued nioiguchi along the bottom half. The bōshi is sugu with a ko-maru-kaeri.

The koshirae features a hilt that is covered with black-lacquered same and wrapped with black-lacquered leather. Towards the cutting-edge side, a menuki like ornament in the form of a long and thin yamagane plate is inserted which shows engravings of a nine-coins crest and karakusa. The saya is covered with thin black-lacquered leather with an additional layer of greenish fabric whose pattern is no longer discernible. The fittings are of yamagane too and show the same ornamentation as the menuki. Unfortunately, the tsuba, fuchi, and kojiri are missing. In terms of prominent kabutogane, tapering and noticeable thinness of the saya, the mounting is typical for the late Heian period.

So far, so awesome, 800 years old as mentioned, and I want to conclude by mentioning that there is the tradition that Minamoto no Yoritomo explicitly chose Ko-Bizen Naritaka for making the swords he was awarding to his closest retainers. Apart from the one introduced here, there are two more of these “Yoritomo-reward-Naritaka” extant. By the way, we know of less than ten signed works of Naritaka that are extant today, but let’s introduce the other two.

One (see picture below) was given by Minamoto no Yoritomo to Kudō Suketoki (工藤祐時, 1185-1252) some years after his father Kudō Suketsune (工藤祐経, 1147-1193) was killed in the course of the Revenge of the Soga Brothers. Later, one of Suketsune’s descendants, Kudō Naritaka (工藤就堯), presented the sword to his new master, the Masuda (益田) family, who were the shugo-daimyō of Iwami province. The Masuda later became karō elders of the Chōshū fief and owned the sword until recent times. On June 6, 1980 it was designated as a jūyō-bunkazai and eventually bought by the state which put it into the custody of the Kyōto National Museum, This blade too is completely ubu, signed, has one mekugi-ana, a nagasa of 80.4 cm, and shows a kitae in itame and a ko-midare hamon that is mixed with ko-chōji. 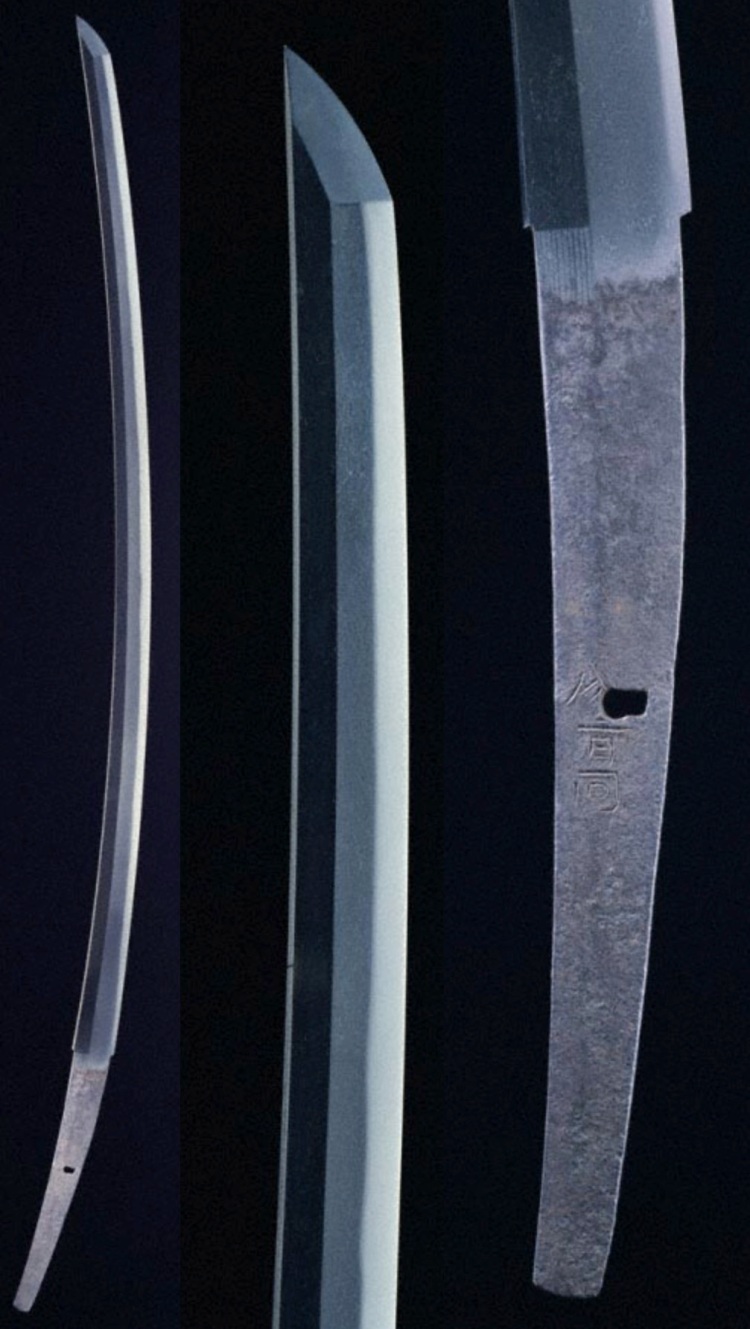 The other one was presented by Yoritomo to his general Sawara Yoshitsura (佐原義連) who was fighting for him in the northern Ōshū region, eventually receiving the lands of Aizu. Yoshitsura gave the sword later to his grandson Mitsumori (光盛) who changed his family name to Ashina (蘆名) and it was the Ashina who handed it down for the years to come. The blade (see picture below) has a nagasa of 82.4 cm, a sori of 2.7 cm, is completely ubu and signed in niji-mei too, and has two mekugi-ana. The jigane is an itame that tends to nagare and that features ji-nie and chikei. The hamon is a nie-laden chōji-midare with a rather subdued nioiguchi that is mixed with nijūba, many ashi and yō, and with kinsuji and sunagashi. The ha gets wider and more flamboyant along the monouchi. The bōshi is sugu and has a ko-maru-kaeri with a few hakikake on the omote side. 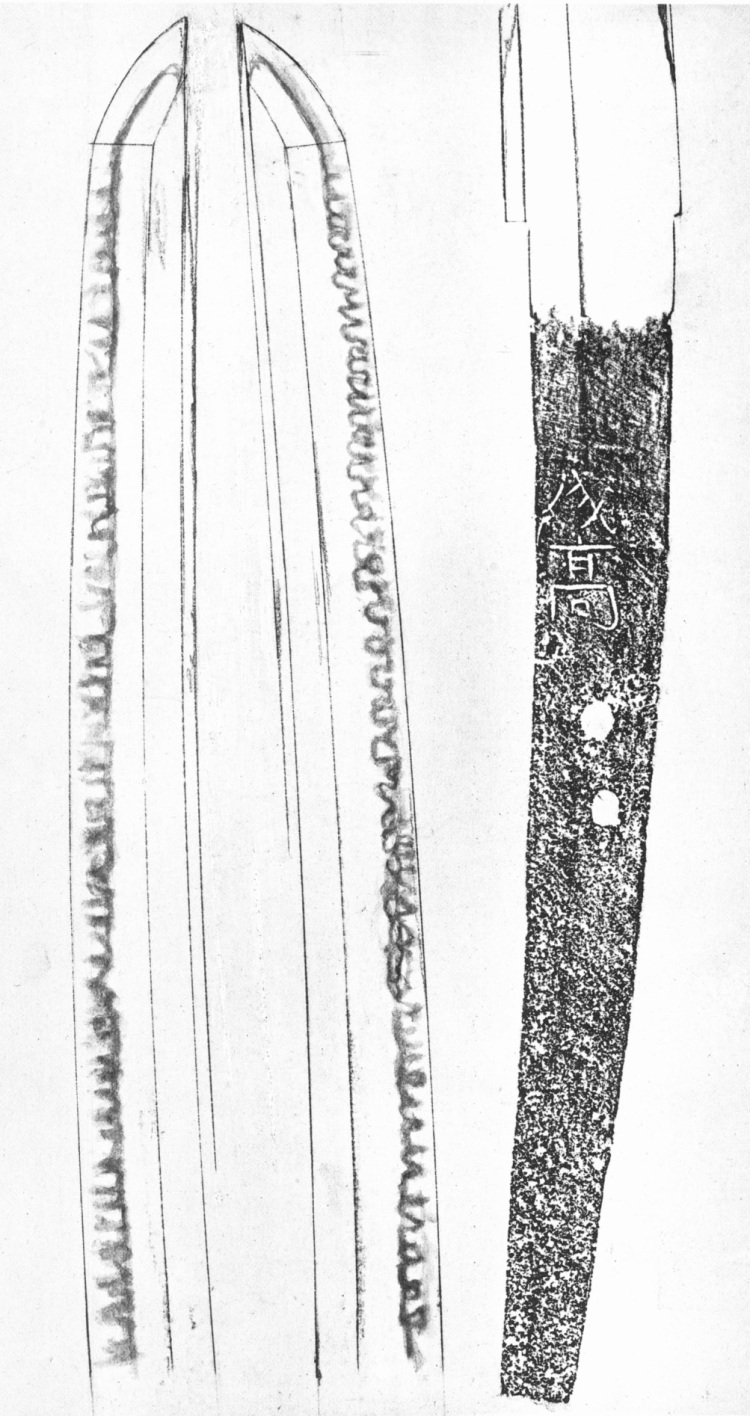 The last blade is a bit different as it is noticeably more flamboyant and a hint healthier than the other Naritaka works. The NBTHK noticed that already and also commented on it that also the signature differs a little bit but that all the differences may go back to a somewhat later production time. The meikan date Naritaka around Jō’an (承安, 1171-1175), an era which leaves room for Naritaka also working into the early Kamakura period. Well, we don’t know the years of birth and death of its alleged former owned Sawara Yoshitsura but we do know that Minamoto no Yoritomo died in 1199. So if it is indeed true that he ordered Naritaka to make this sword for Yoshitsura, then it was probably towards the very end of his life, what equals very very early Kamakura. As for Yoshitsura by the way, records say that he either died in 1192 at the age of 75, in 1203 at the age of 78, or in 1221 at the age of 82. Possible scenario: The blade is early to mid-Kamakura and goes back to the hand of a successor of Naritaka, maybe even made for the Sawara, who then later “suggested” that this is the sword that was once given by Minamoto no Yoritomo to their famous predecessor…