Whilst doing cataloging work for the Samurai Art Museum, Berlin, I came across a fuchigashira set by Gotō Ichijō (後藤一乗, 1791-1876) whose motif I had troubles with identifying. Now as you can see in picture 1 below, the set shows, embedded into thunder clouds and lightning, a fiercly looking guy wielding a sword, and although I am not yet 100% sure, I had the hunch that it might represents the story which I am going to share with you now. Or in other words, I might later find out that the fuchigashira set actually depicts something else, what is quite possible, but that hunch of mine about what it might show is a pretext for introducing that very story here. 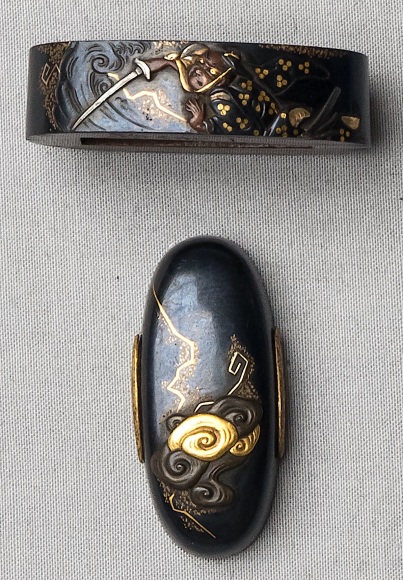 The year is Tenbun 17 (天文, 1548), a very hot fifth day of the sixth month, and the 35-years-old Tachibana Dōsetsu (立花道雪, 1513-1585) is taking a nap under large tree near his hown town of Fujikita (藤北) in Bungo province. (Note: That is according to the early Edo period Ōtomo Kōhai Ki (大友興廃記). The 20th century Yanagawa Shiga (柳川史話) says the incident took place on the fifth day of the sixth month of Tenbun six (1537) when Dōsetsu was 25 years old.) Suddenly, a storm came up and a big thunder woke up Dōsetsu, a thunder which was immediately followed by a lightning that struck the tree. But Dōsetsu swiftly jumped out from under that tree, drew his cherished sword Chidori (千鳥), “Plover” (named after its plover menuki), and cut the God of Thunder that came down on him in that lightning. So he survived but the lightning did struck him, although records vary on how much he got affected, that is, from “his legs constantly hurt throughout his life afterwards” over “his left leg was crippled” to “half (the left) of his body was paralyzed henceforth” is possible.

Picture 2: Tachibana Dōsetsu (also named Bekki Akitsura, 戸次鑑連). Note how the face with the fierce eyes just looks like the depiction on the fuchigashira.

Historic records mention that in his later years, retainers had to carry around Dōsetsu in a palanquin from which he gave orders wielding a long Bizen Katsumitsu (備前勝光) tachi with a nagasa of 82 cm in the one, and a teppō in the other hand, plus having a 3 ft long staff dangling from a cord attached to one of his hands which he used too to give orders. Now there is the tradition that Dōsetsu went like that, i.e. with the palanquin, into battle after the lightning hit him but when we look at other period records, we learn that he distinguished himself in consecutive battles (taking place in the years 1562, 1567, 1568, and 1569). None of these period records mention a palanquin and it is stated that in the 1567 Battle of Yasumimatsu (休松の戦い), he killed seven men with his sword and in the 1568 Battle of Tatarahama (多々良浜の戦い), he was riding right into the enemy lines from wherein he fought furiously. So, it is pretty unlikely that he did all that from a palanquin and it appears that he was doing pretty ok with what he suffered from that lightning stroke (it is said that throughout his life, he participated in 37 battles!) and that it only started to bother him in later years. In short, I think that people saw the old and then half-paralyzed Dōsetsu fiercely commanding his men from the palanquin and the legend was created that he had always been that way since he was struck by a lightning as a young man.

So far Dōsetsu but what about the sword? It is still extant and preserved in the Tachibana Museum (立花家資料館) in Yanagawa, Fukuoka Prefecture. Well, this is the blade which was handed down as Raikirimaru because there is some discrepancy in measurements. The today extant blade has a nagasa of 1 shaku 9 sun 3 bu (58.5 cm), i.e. it was shortened at one point to become a compact uchigatana, or an ō-wakizashi if you will. The Tachibana family records however (Onkoshimono Yurai Oboe, 御腰物由来覚) mention the blade as measuring 1 shaku 6 sun 7.5 bu (50.7 cm) in nagasa. There is nothing wrong with period records not matching the present-day length of a sword as there is always the chance that it has been shortened since but this doesn’t work the other way around, that is, the blade can’t magically get longer and grow again 8 cm. A possibility is of course that the person who compiled the Onkoshimono Yurai Oboe just made a mistake and got the nagasa wrong.

Back to Dōsetsu. When he died in Tenshō 13 (天正, 1587), the sword came into the possession of his adopted son and successor Tachibana Muneshige (立花宗茂, 1567-1643) who became the first Tachibana daimyō of the Yanagawa fief (柳川藩) of Chikugo province, the fief the family then ruled until the abolition of the feudal system. The ura side of the tang bears towards the nakago-jiri the kinzōgan-mei “Tachibana Hida no Kami shoji” (立花飛騨守所持), “owned by Tachibana Hida no Kami.” Hide no Kami was the honorary title of Muneshige but it is unclear if he himself had it added or if it was done later. Also unclear is if it was Dōsetsu who changed the nickname of the sword from Chidori to Raikirimaru or if one of his successors decided to better stick to that legend with the lightning and that the sword shall henceforth be referred to as Thunder Cutter. Even the Onkoshimono Yurai Oboe admits that is unclear from when on the nickname Raikiri was in use. As you can see, we are again facing one of these difficult cases where we have to work from one contradicting period source to the next and where we have little rock solid facts.

Be that as it may, Muneshige bequathed the sword to his successor Tachibana Tadashige (立花忠茂, 1612-1675) who gave it to his sixth son Tachibana Shigetoki (立花茂辰, 1656-1678). Shigetoki died only three years after his father and at the young age of 23 and so it was decided to give the sword to Yashima Iwami Yukikazu (矢嶋石見行和) who was Shigetoki’s younger brother, but an illegitimate child of Tadashige. However, Yukiazu promised that the sword will be treasured within his lineage and the Yashima were anyway closely related to the Tachibana main line. So the sword was still quasi in family possession.

Fast forward about one hundred years, the then head of the Yashima family, Yashima Suō (矢嶋周防), gave the Raikirimaru back to the Tachibana main line, that is, he presented it in Hōreki nine (宝暦, 1759) to the seventh Yanagawa daimyō Tachibana Akinao (立花鑑通, 1730-1798) on the occassion of Akinao was proceeding to Edo. By then, the Raikirimaru was appraised (by whomever) as Mihara (三原) work but as Akinao was going to Edo, plans were made to submit it to the Hon’ami family. For whatever reason, the blade was not submitted to the Hon’ami main line but to Kōho (本阿弥光葆, ?-1788) who was the 5th generation of the Hon’ami Kōtatsu lineage and who appraised it as a Sōshū work. As a return gift, Yashima Suō was given a chiisagatana by master shintō smith Yamato no Kami Yasusada (大和守安定).

Picture 4: Color photo of the Raikirimaru.

Then some time during the early Shōwa era, Hon’ami Kōson (本阿弥光遜, 1879-1955), whom I just dedicated an article recently here, was examining the swords in the Tachibana collection and in his 1942 published Tōken Kantei Hiwa (刀剣鑑定秘話), he noted the following on the Raikirimaru:

“I was respectfully examining the Tachibana treasure sword Chidori, which has been renamed to Raikirimaru. The blade measures just around 2 shaku and it appears that at one point, it had suffered some fire damage. However, it is in a very old polish so I am not really able to tell much about its workmanship/quality, but it looks quite promising.”

To wrap things up, I want to briefly address the workmanship of the blade. As you can see in picture 3 and 4, it features quite a deep sori and ends in a chū-kissaki, what suggests that it was once of a pretty magnificent tachi-sugata, probably end of Kamakura. The jigane is a ko-itame that is mixed with nagare and the hamon is a nie-laden suguha with a wide nioiguchi but the jiba is overall relatively calm and does not feature much prominent hataraki like chikei and kinsuji. So, although this is just a remote diagnosis without ever seeing the sword, I can both understand the Mihara and the Sōshū approach, the latter more like referring to early Sōshū like Shintōgo Kunimitsu (新藤五国光) or Yukimitsu (行光). The nakago is ō-suriage as mentioned, has katte-sagari yasurime, three mekugi-ana, and of the kinzōgan-mei, the gold has come off of the last three characters.

So, when I have the chance to travel to Fukuoka, I surely want to visit the Tachibana Museum and I then want to inquite beforehead if it is possible to see the Raikirimaru (not sure if it is on permanent display but hands-on study would be perfect of course).