It has now been almost ten years since I have translated Itô Mitsuru’s first book on the Higo masters, Works of Kanshirô Nishigaki, and as Higo-tsuba are quite a world of their own, this translation and the translation of the subsequent two Higo volumes gave rise to several fruitful discussions and Itô’s books were undoubtedly a big success in giving collectors a greater understanding of these very special tsuba which are so sought after since the time they left the workshops of the masters. It is only natural that many questions remain, be it about attributions based on sophisticated differences in workmanship or about historical aspects. Well, this time I want to forward some thoughts on a question that rather belongs to the smaller unsolved mysteries when it comes to Higo-tsuba, and that is the question on why are Wada-sukashi (和田透し) named that way. 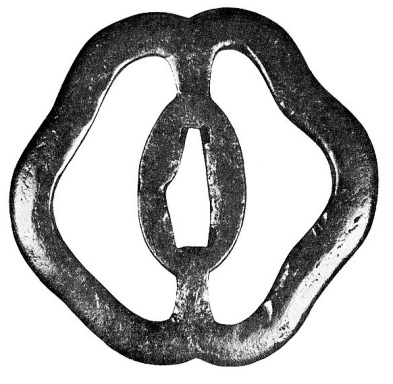 First, what are Wada-sukashi at all? Wada-sukashi belong to the group of symmetrical ô-sukashi that occupy a majority of the left and right surfaces of a tsuba. That means the general term for such an openwork design is sayû-ô-sukashi (左右大透し, lit. “left and right ô-sukashi”). For example, also the famous namako-sukashi (海鼠透し) design comes under that category and it seems that such large and symmetrical ô-sukashi designs originated in Higo in the first place. Another way to describe Wada-sukashi tsuba in a neutral way would be futatsu-mokkô otafuku-gata, i.e. “two-segmented mokkô-gata in otafuku shape.” So why Wada-sukashi? Numata Kenji (沼田鎌次) writes in his two-volume Tsuba-Kodôgu Gadai Jiten (鐔・小道具画題事典, Yûzankaku 1998) the following:

“It was custom since olden times for the Hosokawa family to name these tsuba that way and thus the term was locally in use in the Higo area but the origins and the reasons of this naming are unclear. So the meaning of ‘Wada’ is unclear. As seen in the picture, both the shape and the sukashi design of the tsuba actually don’t have any specific highlights and are hard to grasp but there is something in the quality of the iron and the way the niku is distributed that attracts ones attention. So they belong to the realm of the so-called mysterious tsuba and more and more people get attracted by their hidden charme. This tsuba shown here is according to tradition a work of Hosokawa Sansai.”

So starting with Numata, every reference you consult for Wada-sukashi says that the meaning of this term is unclear but interesting is, that the term is quasi accepted as it is and for example also the NBTHK issues papers that say straightforward Wada-sukashi (see picture 2). Now when one reads this term, you think first of all of the common family name “Wada” but after doing some research, I was not able to come up with any historic member of any of the Wada branches that was somehow in a master-vassal relationship to the Hosokawa. Also none of the Higo-kinkô lineages was from the Wada family and it seems anyway odd to name this rather plain sukashi motif after a person, except for if this person was the inventor of this design. Next thing to check is to see if Wada is a place name and refers to some town or region in former Higo province but again, no result. 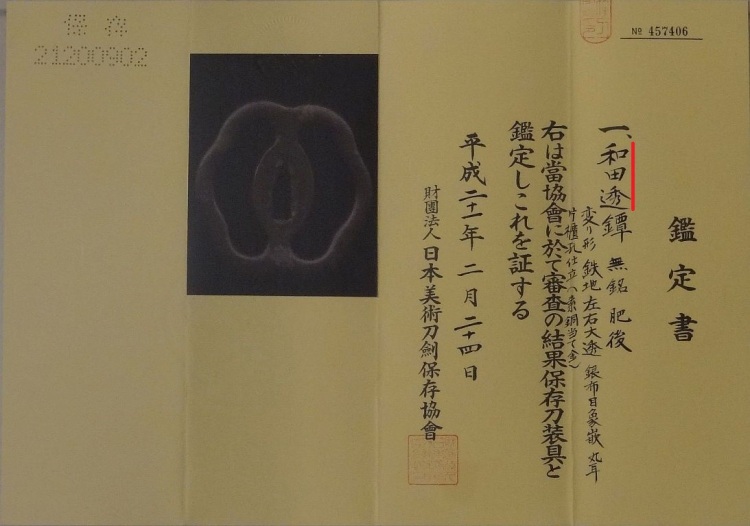 So what remains when “Wada” neither refers to a family nor to a place name? Time for the dictionaries and a neutral, i.e. hiragana search for the term wada (わだ), and lo and behold, both the Ôbunsha Zen’yaku Kogo Jiten (旺文社全訳古語辞典, Ôbunshas’ Dictionary for Classical Japanese) and the dictionary Kôjien (広辞苑) contain an (almost identical) entry on wada. According to these dictionaries, the term wada was written with the character (曲) and means “curved terrain,” e.g. “inlet.” Both sources quote a poem from the Man’yôshû as major reference for the use of this old term which goes:

“The water with its gently rippling waves on the great inlet at Shiga is still, so how could we meet the people of the past?”

This poem is by the Asuka poet Kakinomoto no Hitomaro (柿本人麿・柿本人麻呂) who was the most prominent of the poets included in the Man’yôshû and who is ranked as one of the Thirty-six Immortans of Poetry. Hitomaro wrote this very poem when he was travelling along Lake Biwa and passed the former capital of Emperor Tenchi (天智天皇, 626-672) who had installed his court at what is present-day Ôtsu (大津) at the southern end of Lake Biwa, i.e. the area which Hitomaro refers to as “great inlet” (ohowada). Only five years after Tenchi had made Ôtsu imperial capital, Emperor Tenmu (天武天皇, 631-686) attacked that court, seized power, and relocated the imperial capital back to Asuka. Now Hitomaro was serving Tenmu’s successor, Empress Jitô (持統天皇, 645-703) and writing in a sentimental manner (“how could we meet the people of the past?”) about the former enemies of his then quasi employer was a sensitive thing (“water is still” is a metaphor for “standstill” or “no progress” in a wider sense). But Jitô was actually Tenchi’s daughter and maybe his poem was welcomed by her rather than seen as poetical attempt to long for the regency of the past.

Picture 3: The Wada-sukashi tsuba shown in the Higo Kinkô Roku which is attributed to Hayashi Matashishi. The note reads tagane (タガネ), i.e. it is worked off along the inner edges in tagane-sukashi manner as seen for example on some Akasaka-tsuba.

The Man’yôshû and all the other anthologies of this caliber were classics and every person and bushi of good breeding knew them so to speak inside out. Hosokawa Sansai was born into a family that was for generations deeply involved in cultural matters (more on that here) and was accordingly educated. What I now think is that maybe the curved, somewhat narrowing openings of the sayû-ô-sukashi tsuba in question might have reminded Sansai of inlets but as he was a man of vast reading, he just did not name them irie (入り江) what is the so to speak “normal” term for “inlet.” He was probably more thinking in terms of the old classics and thus referred to an inlet by the poetical term wada (わだ・曲). Well, we don’t know anything about how and when this term was written down when it comes to tsuba but the later and present-day way of writing of this sukashi design with the characters (和田) for wada does not make any difference. There are namely the so-called Man’yôgana (万葉仮名), an ancient writing system that employs Chinese characters to represent Japanese language. That means, most of the old classics can entirely be written in Man’yôgana and the above quoted poem of Hitomaro that starts with “Sasanami no Shiga…” could also be found like this (with the term wada highlighted):

In short, the Man’yôgana allowed poets to use phonetic homonymous kanji characters for the Japanese hiragana syllables, i.e. the kanji are used for their sounds and not their meanings. There was no standard and different kanji could be used for each sound so wa could have been written with the characters (和・丸・輪) and da/ta with the characters (太・多・他・丹・駄・田・手・立) and any combination was possible to represent wada. Well, most common Man’yôgana replacements for wa and da/ta were (和) and (太・田) and that is in my opinion how the sukashi design that reminded of inlets, wada (わだ・曲), was eventually written (和田). Please note, it does not necessarily mean that Sansai or whoever from the Hosokawa family had the Man’yôshû and Hitomaro’s poem in mind when seeing or trying to see something in these tsuba. It is as mentioned just that he or they were thinking in poetical terms and named them wada instead of irie. When thinking of inlets along the coast of Higo, the Shirakawa that runs along Kumamoto Castle, the Midorikawa to the south, or the Kumagawa with its small Mugi Island at the gates of Yatsushiro Castle come to mind, alhough I am not sure how these regions looked like at the beginning of the 17th century. Or Sansai really thought of Lake Biwa when seeing Wada-sukashi tsuba and remembered Hitomaro’s poem? I guess we will never know but for the time being, the approach with the old poetic term for “inlet” makes more sense to me than too look for a person or place named Wada to find out the backgrounds of the naming of this motif. In other words, the sukashi design of Wada-sukashi tsuba resembles as much inlets (or even lake Biwa with a little imagination, see picture 4) as namako-sukashi resemble sea cucumbers. And maybe after writing the old term wada with Man’yôgana over several centuries, the connection to the initial reference “inlet” got lost.

Picture 4: Wada-sukashi next to Lake Biwa.

Picture 5: Both sides of a Wada-sukashi tsuba that papered straightforward to “Higo.” Please note the delicate silver nunome patches and the subtle file marks at the bottom mokkô indentation that is so often seen on Higo-tsuba (i.e. namako-sukashi) of that interpretation.