Had a root canal treatment earlier today so I will be brief as I don´t want my painkillers to gain the upper hand over my writing. In my article on the Musashi-Masamune I presented four different oshigata to the very same blade. As I had to look for something in older Token Bijutsu magazines, I found another oshigata to a blade of Kotetsu I introduced in my recent publication Shinto & Shinshintô-kantei (number 236.665). I was surprised how different the reproduction of the monouchi section is. Well, we can agree that the bôshi and the connected gunome-protrusion right before the yokote match but then it seems that the hamon take way a different course. It seems at a glance that the hamon on the upper oshigata is slightly compressed but after a closer look we learn that also the course after the second connected gunome-protrusion differs. At the upper oshigata, four bumps follow after the protrusion before the hamon lowers a little. At the lower oshigata, there is one large bump and two smaller before the lower section starts. Just on the basis of these oshigata alone I would say we are facing two different blades but I double-checked the descriptions. Both blades have exactly the same measurements and exactly the same tameshi-mei. Please not that at the lowermost oshigata of the tang, the maker saw a kind of yakikomi at the habaki area whereas the hamon continues as suguha and even goes down on the upper oshigata. For your information, the oshigata I used in my Shintô & Shinshintô-kantei was published in issue 665 (June 2012) of the Token Bijutsu. The other one is from issue 581 (June 2005). So I guess the differences can´t be explained by a new polish. 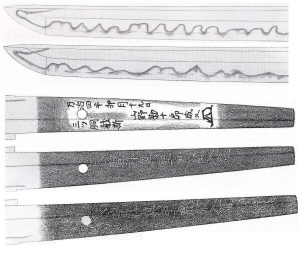 2 thoughts on “Another different oshigata”