This time I want to introduce quite a rare blade which has a certain historic significance and thus, obviously, a very interesting historic background. It is a work by the Egawa Tarōzaemon Hidetatsu (江川太郎左衛門英龍, 1801-1855) who was a daikan (代官), a bakufu governor of lands that were directly owned by the Tokugawa. From the mid-18th century to the Meiji era, this governmental post was in charge of lands stretching over the provinces of Sagami, Izu, Suruga, Kai, and Musashi.

Now Hidetatsu was member of a very prestigious family which can be traced back to the Heian period and of which many heads can be tied to important historic figures throughout the history of Japan. The original family name of the Egawa was Uno (宇野), which was a place in Yamato province, but when they supported Minamoto no Yoritomo (源頼朝, 1147-1199) in raising one of his armies, they were given the Egawa manor in Izu province. They later successively served important rulers as indicated, for example the Hōjō regents of Kamakura, and changed their name to Egawa in the Muromachi period. At the end of the Muromachi period, they were switching sides, from Hideyoshi to Ieyasu, who later declared them daikan governors.

There is a Wikipedia entry on Hidetatsu here but I just wanted to stress the history of his family as it is not mentioned in the article and as it is kind of important to understand why things where as they were. In other words, and when it comes to Hidetatsu’s later military functions, the bakufu did not appoint a random samurai of good standing but was rather relying on hereditary well-established power structures. And that position within this very power structure and its accompanying connections allowed him to pursue at the side the activities that I will describe in the following.

So, Egawa Hidetatsu was of high rank and thus raised and educated accordingly. He studied swordsmanship of the Shintō Munen-ryū (神道無念流), Confucianism, calligraphy, classical poetry, painting (see the pretty good self-portrait above), rangaku (Dutch/Western learning), and gunnery. He was also an early advocate of vaccination and tried to improve local agriculture and the latter two things earned him within the local population the praising nickname “The Reformer Egawa Daimyōjin”. Apart from that, he was using his bakufu salary to employ talented men, for example two rangaku scholars, an expert on classical Chinese, and a swordsmith, and that brings us back to the topic.

Hidetatsu was learning sword making from the shinshintō grandmaster Taikei Naotane (大慶直胤, 1778-1857) but when later Naotane kicked one of his students out of the school, Tanenaga (胤長), who had a serious drinking problem, Egawa Hidetatsu took Tanenaga in and employed him for a salary in the form of a stipend for three persons (I have briefly written about this relationship about four years ago here). Tanenaga was thus moving to Izu where also another very talented swordsmith was working for Hidetatsu, Nakayama Ikkansai Yoshihiro (中山一貫斎義弘, 1797-1865). This “venture” is insofar interesting as Egawa, as being the local daikan, was pushed by the bakufu to ensure to protect Japan’s coasts in that area after the Morrison Incident had occured in 1837 and gave so to speak everyone involved a wake up call. Two years later, the bakufu put Hidetatsu officially in charge of establishing the defense of Edo Bay and so he was thoroughly committing himself to the production and the most effective use of Western-style cannons. As pointed out in the Wikipedia article on Egawa, there was the debate going on at that time whether or how to adopt Western guns/weapons and methods. Some were absolutely against that and stressed that the nation should focus on traditional weapons and tactics whilst others promoted a theoretical synthesis of “Western knowledge” and “Eastern morality” in view of “controlling the barbarians with their own methods”. I don’t want to go into too much detail here because entire books have been written on that inner conflict of Japan and as I want to focus more on the sword aspect.

That blade shown in picture 3 is now a work of Egawa Hidetatsu himself. It is a wakizashi with a rather wide mihaba, a shallow sori, a thick kasane, and a chū-kissaki. The kitae is an itame with ji-nie and the hamon is a gunome in ko-nie-deki that is mixed with ko-notare, chōji, and small tobiyaki and that features a rather tight nioiguchi. The bōshi is midare-komi with a ko-maru-kaeri. The tang is ubu, has a shallow ha-agari kurijiri, sujikai-yasurime with keshō, one mekugi-ana, and is entirely finished in the way most Naotane students finished their tangs. The overall deki reminds of Naotane working in the Bizen tradition. Incidentally, the blade was a heirloom of the Ichiki (市来) family who were retainers of the Satsuma fief. Egawa had students from all over the country who learned Western gunnery from him so it is possible that a member of the Ichiki family studied with him and either purchased the wakizashi from Egawa or received it as a gift.

I want to conclude this article with another sword-related episode from Egawa’s life. As mentioned above, he also sincerely studied swordsmanship as it was expected from a samurai of his rank and position. One of his fellow Shintō Munen-ryū students was Saitō Yakurō Yoshimihi (斎藤弥九郎善道, 1798-1871) who was of peasant origin, worked from the age of twelve onwards as a shop boy, but went to Edo as a teenager where he became the servant of a hatamoto what enabled him to practice swordsmanship. Later he became an assistance instructor of the Shintō Munen-ryū where he met Egawa who gave him money to establish in 1826 his own dōjō, the Renpeikan (練兵館), and accepter Saitō as his retainer. 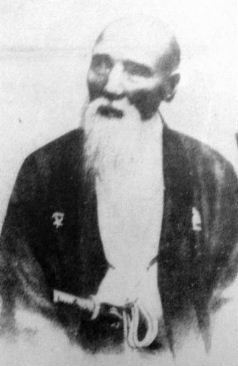 As stated several times in my books, the nerves of everyone were on the edge in the late Edo period as so many fiefs were facing bankruptcy and famines and many considered the Tokugawa Shogunate as either the cause for all of that or being unable to do anything against the country going south, or both. So uprisings were not uncommon and a major one was the rebellion started by Ōshio Heihachirō (大塩平八郎, 1793-1837) in Ōsaka in 1837. Accordingly, the bakufu was in crisis mode and also wanted to see what was going on in their own lands. So they gave orders to Egawa to check out the “mood” of Kai province which was under his jurisdiction as daikan because Kai was known as cesspool of gamblers at that time and there was a lot of unrest in that province. Now Egawa realized that he most likely would not get a real insight into matters when he goes up north into Kai with his conspicuous daikan retinue and so he came up with the plan to just take Saitō with him and both disguising as sword dealers. They were subsequently also checking out parts of Musashi and Sagami province like that and there is a drawing extant that Egawa made later about the “adventure” of the two (see picture 5).

PS: There is a sword in the new Samurai Art Museum, Berlin that is directly connected with the above mentioned Morrison Incident and which I want to introduce at a later point.