Let me introduce the hot-off-the-press catalog to the currently running Ishiguro exhibition that I had the honor of translating for the NBTHK. The exhibition started two weeks ago but will be up until October 30. So if you are in Tokyo at that time, I would highly suggest to visit the NBTHK (aka The Sword Museum).

The catalog turned out really nice! High quality hardcover in about letter format with great pictures of the fittings, also featuring some stunning close-ups. The catalog is basically divided into four chapters: 1. Masatsune, Masatsune II, and Koretsune, 2. Masaaki, 3. Masayoshi and Koreyoshi, and 4. Okamoto Shûki. Okamoto Shûki was the son of Ishiguro Masayoshi but became a painter. Kubo Yasuko, the senior curator at the NBTHK, dedicted Shûki a detailed chapter in the catalog. The catalog has 95 pages and can be ordered from amazon.co.jp for just 2,500 Yen here. 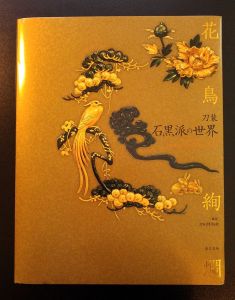 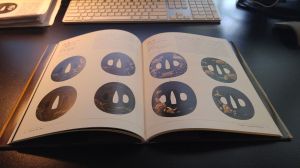 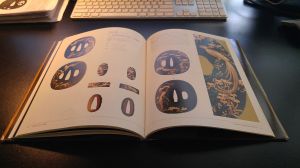 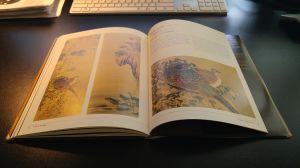 Note: I just got the catalog the other day and browsing through the pages, I learned that it was messed again with the text that I had delivered, and that multiple times. I had my translation proofread, of course, and I understand very well that passages are subject to change at the last minute but the passages that I found that do not correspond to the text that I forwarded to the NBTHK rather seem to contain arbitrary changes (for example sometimes just certain words were deleted what makes the sentence(s) in question odd, at best, or straightforward wrong in the worst case). I mean, not a big issue taking into consideration the quality of the catalog as a whole but it kind of bugs me because its also about my very own humble reputation as a translator. Anyway, I still highly recommend the catalog but wanted to have that out. Well, this time its at least not as bad as with the last catalog (please read here), but still… 😉