Last year, Iiyama Yoshimasa (飯山嘉昌) forwarded in a brief article (Tôken-Bijutsu 677, June 2013) the theory that the famous “bird of prey catching a monkey” (môkin-hoen no zu, 猛禽捕猿図鐔) tsuba of Shimizu Jingo (志水甚吾) (picture 1) depicts actually an eagle rescuing a monkey rather than catching him. When the June magazine arrived last year, I just skimmed through the text as I was quite busy at that time and I even forgot to reply to an inquiry from a fellow enthusiast who asked me if the article is on the eagle motif in general or on Jingo´s eagle interpretation in particular. Now just a few days ago, I stumbled by chance over Itô Sanpei´s (伊藤三平) comment on Iiyama´s article in his highly interesting blog which made me curious and so I reread the article. And as it is really exciting to get a complete new view on a well-known motif, I thought I better share Iiyama´s find with my readers. 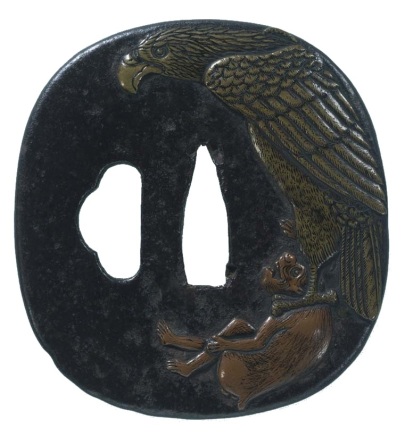 Apart from the discussion that this tsuba is actually a work of Nishigaki Kanshirô (西垣勘四郎) – the present owner, the Tôkyô National Museum labels it as work of Jingo, Itô Mitsuru (伊藤満), the author of the excellent Higo books says it’s a work of Kanshirô – all publications quote the tsuba´s motif as mentioned above, i.e. “bird of prey catching a monkey.” Iiyama now saw in an art show on TV a report on the Kangi´in´s (歓喜院) Shôtendô (聖天堂) which was designated as kokuhô in July 2012. The temple is located in Menuma (妻沼) in Kumagaya (熊谷市) in Saitama Prefecture and the Shôten Hall holds a panelling into which the motif “eagle and a monkey” (washi to saru, 鷲と猿) is carved (picture 2). The carvings are attributed to the semi-legendary early Edo-period sculptor and carpenter Hidari Jingorô (左甚五郎). Striking is the similarity of this carving to the motif of the tsuba and now things get interesting. The Shôten Hall´s carving is namely described as follows: “Motif of an eagle rescuing a monkey who fell from a tree into a raging stream … The monkey stands for the hard to control human earthly/carnal desires and the eagle for Shôten (聖天) – also called Kangiten (歓喜天), the patron saint of the temple and Shôten Hall – who rescues us from these desires.” Shôten is generally considered to be the Japanese Buddhist form of the Hindu elephant-headed god Ganesha, but is also identified with the Shôkannon-Bosatsu (聖観音菩薩), the Bodhisattva Avalokiteśvara who embodies the compassion of all Buddhas. 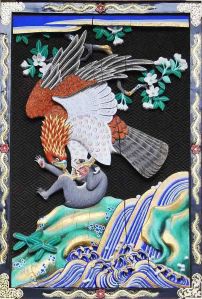 Picture 2: carving of the Shôten Hall

And when we now take a closer look at the tsuba, we see it as Iiyama and Itô write in a different light, namely that we are not facing a like so often described “fierce and determined eagle standing for the austere bushi of the Sengoku period,” but a calm eagle with a closed beak, without any claws, grasping the more grateful than scared monkey right at the shoulders, who is about to drop him off gently onto the ground. Compared to the carving, at which the artist created in the context of the temple an allusion to the deity Shôten, the new interpretation of the tsuba´s motif makes pretty much sense. And so Iiyama suggests that the motif should be renamed to “ôtori saru o sukuu” (鷲救猿), i.e. “eagle rescuing a monkey.”